PingProperties has concluded a long-term lease with Vissie for a retail unit in Carnisse Veste shopping centre in Barendrecht. From 1 March Vissie will lease 149 m² lfa on the ground floor at Van Beuningenhaven 7. The space will be refurbished during the coming months and is expected to be officially opened in early April. The Vissie franchise format is an excellent addition to the range of shops in the centre, as until now there has been no fishmonger in Carnisse Veste.

About Vissie
Vissie is a new franchise concept from the same owner as Kippie. The idea of Vissie arose from this successful franchise format: the same concept but this time with fish. Vissie focuses in particular on the many shoppers who enjoy eating fish in all its forms. Its products are accessible to a wide public and are prepared and presented using traditional methods. The shop has a delicious range of fish products designed for convenience. This is a major scoop for Carnisse Veste, as it is the first Vissie shop to open its doors.

Carnisse Veste Daily Convenience Centre
The complex (approx. 15,300 m² of retail space) consists of 50 units on two floors and is easily reached by public transport and car. All units are supplied from two large delivery lanes accessed from Portlandse Baan. Parking facilities with 495 free parking spaces are on the ground floor of the building. Lessees focus mainly on food and day-to-day non-food necessities. Carnisse Veste is visited by no fewer than 3.9 million people each year. 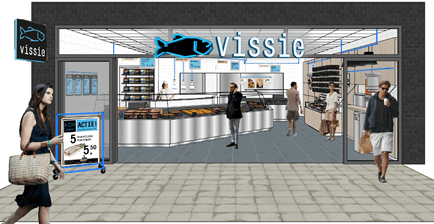 PingProperties has reached a lease agreement with Lamboo Medical for an office development to be built at the Dutch Tech Campus.

On 15 July PingProperties has added the Passage Schiedam shopping centre, located in the centre of Schiedam, to its portfolio on behalf of Daily Convenience Centre III.

PingProperties has reached agreement with Anytime Fitness on a long-term extension of the lease for Middeldijkerplein 93-95 in the Carnisse Veste shopping centre in Barendrecht. The total lettable floor area of the business space is 591 m².